Bengalooru Habba, the definitive city festival which celebrates Bengalooru will be held from December 3rd to December 10th, 2006....here is the glimpse on one of the street play @ commercial street.
A series of street theatre performances at multiple locations which will kick off on November 27 and run up to December 10. Under the Umbrella Art programmes, upcoming artistes will do live art at multiple locations...More.. 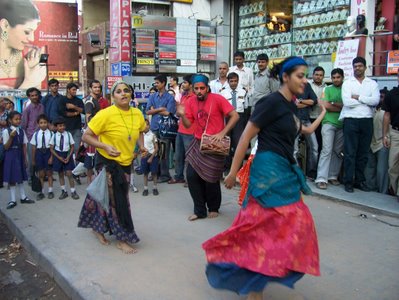 About 2800 artistes will perform in 50 different venues during 'Bengalooru Habba', the city's definitive cultural extravaganza.... Kala Madhyam, which works to promote folk and tribal art forms, will present them at street corners too. New items to watch out for this year will be those related to Suvarna Karnataka, a book fair, sculpture and crafts displays by Crafts Council of Karnataka and programmes will centre around the literary giants of Kannada. Traditional Kannada theatre will be given prime place too. 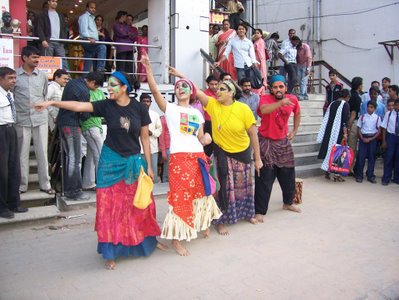 The concerts will feature artists such as Rashid Khan, Gundecha Brothers, Padma Subramanyam, Shobana, Vani Ganapathy, Suma Sudhindra, M.S. Sheela and Nagamani Srinath.
Popular culture will not be left out either. A Bollywood Night featuring the likes of Malaika Arora Khan, and Kailash Kher the Sufi singer has been arranged. The overseas organisations present in Bangalore will add variety to the Habba. Refer..
here is the complete schedule of Bengalooru Habba 2006. The passes can be collected from various places.

Very colorful picture ! These street theatre performances will always have themes and powerful medium to reach common man. I'm sure 'Bengalooru Habba' will be a hit.

Thanks Pandit, keeps me going!

images yet to be colorful

I'm searching for Bloggers around the world interested in helping spread the word for a rather simple idea: