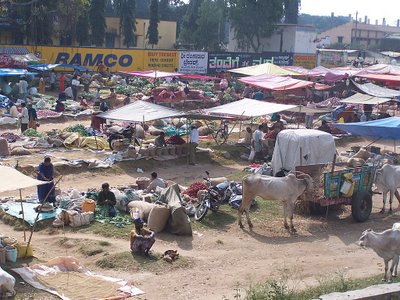 "The Soul of India lives in its villages", declared M. K. Gandhi in the beginning of 20th century. According to the Indian Census of 2001, 74% of Indians live in villages. 236,004 Indian villages have a population less than 500. 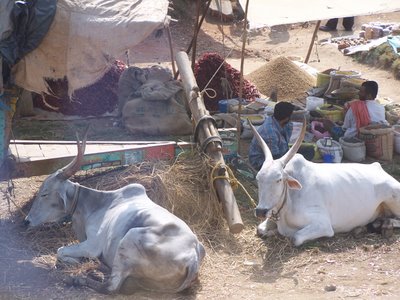 The need for these small villages to trade and buy the nessasities has a unique solution called 'Weekly Market'.

On the outskirts of Bangalore, these weekly markets florish on a spcific weekday for the villagers and farmers to direcly sell their produce and buy the essencial groceries from the same venue. this mechanisum is quite an old arrangement ( dating back centuries) and seen throughout india generally the
takula place is choosen as the venue and 30-50 villages surrounding participate. some of these markets still have Barter systems too...

barter trade is already making a comeback. and i do think the type of commodities sold here is most suitable for the exchange method

The way that peoples of the world handle their needs is always fascinating. Thanks for the info. The aerial shot gives a good overview.