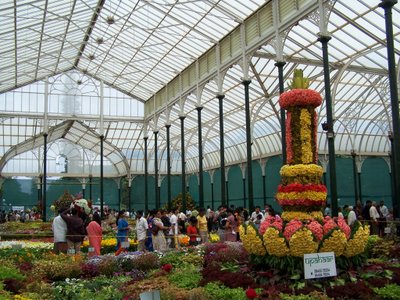 The Indian Independence day horticultural show is organized from August 8 to 15 in the Glass House at Lal Bagh, Bangalore. 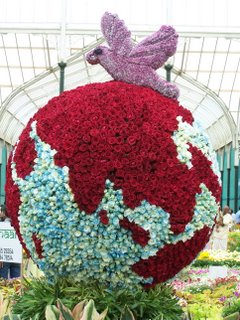 The annual flower show was inaugurated at the Lal Bagh Glass House on Tuesday as part of Independence day celebrations. This event is jointly organized by the Mysore Horticultural Society and the state's department of horticulture.

People from all over Bangalore flock to the venue to view this beautiful event. The school children are brought in batches to visit this place. The artists have been very creative in designing the Indian Flag with Anthurium flowers.
Such flower-shows are conducted twice a year in this historical Glass House in Lalbagh, Bangalore. One in January and the other in August-Septemb since 1922. Since 1951, these shows are organized coinciding with the Republic Day celebrations and the Independence Day celebrations respectively. For a period of 8-10 days that attract not only the people of Bangalore city but also people from outside the State and country.

yes, i do have many snaps but don;t know how can i post them all here...

Happy (belated) Independence Day! Unfortunately, I was not able to attend the Indian Independence Parade in New York but hope I can do so next year.

The flower show looks amazing -- that globe with the bird on top is beautiful.

Exquisite, this flower show, made all the more enchanting by the glass house. Lovely photos.