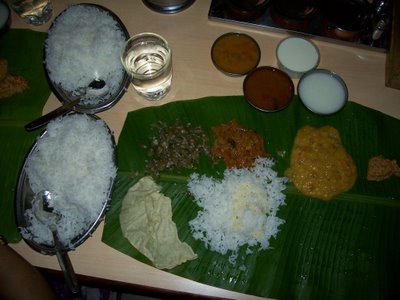 Andhra meals in general could be found in all the south indian hotels & restaurants. People in Bangalore love eating andhra meals in lunch/dinner. One could also find Special Andhra meals in specialized south Andhra hotels and resutaurants such as Nandhini, Amarawati, Bheema's and my favorite on CMH road..Hotel Sridevi to name the few... Where one can reliss this great Andhra food served hot on a banana leaf...

A full Andhra vegetarian meal generally consists of: Annamu - (cooked Rice), eaten together with each of the following items:

> Pappu - Pappu the Telugu word for cooked Lentils
> 2 or 3 'Koora' - (vegetable entrees/curries): Examples include bendakaya (okra), vankaya (eggplant/brinjal)
> Pachhadi - pickle - Aavakaaya(spicy mango pickle) and gongura are examples
> Sambaar (Boiling spicy vegetable soup)
> Pulusu - A vegetable broth resembling sambar, but very different in preparation and taste
> Rasam (a lighter version of Sambaar without vegetables)
> Majjiga pulusu - (a variation of pulusu, made with majjiga (buttermilk))
> Pulihora- (tamarind rice)
> Perugu - Curd (yogurt)
> Appadalu - fried tacos made from rice (usually eaten with pulusu or sambar)
> 1-2 sweet dishes, including one made of milk. Payasam is a very common example, another is bobbatu and poornalu which taste sweet and delicious.

wow, that looks really yummy! I had tried Indian food from time to time ;-)

It's time for me to prepare an andrha meal here in Little Rock USA. Our temperature is about as hot and this looks like a perfect hot weather meal.

Annie...why not the meal is simple yet hot and bit pungent...

You should try Nagarjuna in Jayanager 4th Block. I found it to be the best.